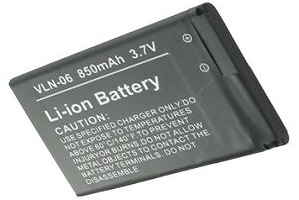 4. Do not expose your batteries to high heat/freezing temperatures

Heat is the worst enemy of batteries. Pretty straightforward.

At low temperatures, you should not attempt to charge your batteries. This is because the maximum voltage that the batteries can take is reduced at cold temperatures.

Note: If the battery gets very hot, stop charging immediately, remove the device from proximity to flammable materials and bring it to a non-combustible surface.

Do not charge at freezing temperatures (below 5 degrees Celsius). Warm it up before you charge if you live in some cold countries.

Note for laptop users: If you are using your laptop for a long time, it is advisable to remove the battery. The heat generated by the normal operation of a laptop is often enough to cause severe lasting damage to the lithium ion batteries.

It is recommended to employ sufficient cooling measures to prevent early failure of your laptop batteries.

5. Try not to charge the battery to the max

When the battery is charged to the maximum, it will stress the battery. When the battery is stressed, it will kill itself faster. It is just like us, the more stressed we are, the higher the probability of a heart attack. (A different analogy: Imagine stuffing yourself with food all day long, and I think that you will be extremely uncomfortable for the day.)

Another reason why it is not recommended to charge the battery to the max is that at such a high charge level, the battery will generate more heat than normal. This excess heat is not welcomed as lithium ion batteries are extremely sensitive to heat.

The batteries manufacturers know this and the charging algorithms for your lithium ion batteries automatically cuts power off at 100%. Then, it will let the battery discharge until ~95% before charging it back up again. This cycle will repeat until you unplug it from the charger.

What should you do: TRY not to charge the battery to the max. But if you need the full charge, its fine also. It is not as damaging to the battery as doing deep discharges.

Note: This is the reason why electric car manufacturers limit the charge in the electric cars’  batteries to 80%. In certain laptops, there is a functionality that will limit the charge in the batteries to 80%. For instance, in Samsung laptops, there is a battery life extender functionality that cuts off power to the battery when it reaches 80%.

6. It is OK to do a partial charge

You can charge your lithium ion batteries to 70%(example) and disconnect the charger with NO ill effects. This is rather unlike other battery types which demand that you charge them to the maximum. Lithium ion batteries are rather forgiving in this aspect. HOWEVER, do a full discharge/charge cycles every once in a while.

If you have to store li-ion batteries, keep them at 40% to 60% charge level. All lithium ion have a protection circuit that will deactivate if the charge level drops below a certain amount. When that happens, no matter what you do, your battery just will NOT charge. If the low charge level is maintained for a long time, electrical short may result when you attempt to recharge it.

Now, you might say why not just charge it to the max (100%)  then leave it there? The problem is when you charge it to 100%, you are stressing the battery. The battery charge level will drop faster than normal.

This is the reason manufacturers ship your smartphones/tablets/laptops partially charged. The charge level allows for lower aging related stress on the battery and gives some room for the battery to self-discharge during storage.

What should you do: Store lithium ion batteries partially charged at a cool place. You must check their charge level regularly and top up their charge accordingly. Do NOT let their charge drop too low.

Note on calibration of Li-ion batteries:

Even though the battery is out of calibration, the battery will still function normally and charge normally. The downside will only be the inaccurate charge level reported by the battery meter.

It is recommended to do a calibration once every 3 months or after 40 partial cycles. Avoid doing deep discharges just for calibration too often, you will shorten the lifespan of your battery.

Please take note that by running the battery down to the red zone(~10%) through normal use and charging it back up again can be considered as a calibration cycle by itself. If you’re a heavy user (100% to red to 100%), your charging and discharging cycles are performing the same duties as a normal calibration cycle. Short version: You do not have to do the calibration if you regularly squeeze every single drop of juice out of your batteries. Look below for update

Update: I have reasons to believe that the earlier information is slightly wrong. A proper calibration should be discharging the battery until the phone turns off by itself.

Hence, if you are a heavy user (regularly discharges your phone till it turns off and charging it back up again to 100%), your charging and discharging cycles are performing the same duties as a normal calibration cycle. Short version: You do not have to do the calibration if you regularly squeeze every single drop of juice out of your batteries.

7 thoughts on “7 Tips To A Longer Lasting Battery”