A moving charge experience a force in a magnetic field.

Derivation of above equation:

Consider a positive charge q moving at constant speed v at right angles to a magnetic field of flux density B. Assuming that the charge travels a distance l in time t, its speed is $v = \frac{l}{t}$ .

Hence, the force on the charge is given by:

Effect of magnetic force on charge

Since the force is of constant magnitude and it always at right angles to the displacement, the conditions are met for circular motion. Hence, the magnetic force on a moving charge provides a centripetal force to the charge.

If the charged particle enters the uniform field at angles other than right angles, it will take a spiral(or helical) path as shown in the figure below. 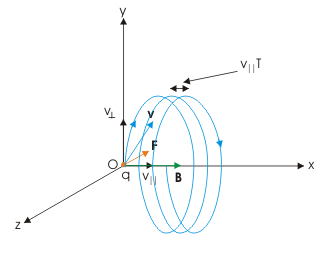