Home H3 A Particle In A Well Of Finite Height


Consider now a particle in a well, but now the walls are of finite height (instead of infinitely high), which we call a potential well. If we again choose U = 0 for 0 < x < L, then U will have a finite value for x = 0 and x = L. 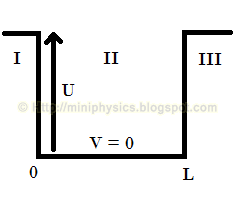 In region II where we choose U = 0, the allowed wave functions are again sinusoidal (because it is similar to the particle in a well of infinite well). However, the boundary conditions no longer require ψ(x) = 0 at x = 0 and x = L.

Since E < U, the coefficient on the right-hand side is positive. We can then write the equation as

The general solution to the above equation is

where A and B are constants.

The general solution can be used as a starting point for determining the appropriate solution for regions I and III.

In region II where x > L, we must rule out the term Aekx.

Hence, the solution for region II is sinusoidal and has the form

where C and D are constants.

These results show that the wave function decays exponentially with distance outside the potential well. In order to evaluate the complete wave function, we need to apply these conditions:

Back To Quantum Mechanics