Sound from a small loudspeaker L reaches a point X by two paths which differ in length by 1.8m. When the frequency of the sound is gradually increased, the resultant intensity at X reaches a maxima when the frequency is 1000 Hz.

Given the velocity of sound is 360 m s-1, at what next higher frequency will a maximum be detected?

A parallel beam of white light (range of wavelengths from 4.5 x 10-7 m to 7.5 x 10-7 m) is incident normally on a diffraction grating. Red light in the second order spectrum is observed to be diffracted through an angle of 60° from the direction of the incident beam.

How many lines per metre are there on the grating?

A taut wire is set into resonance with a node at either end and another single node at the centre of the wire. Which one of the following statements is not correct?

A small pipe opened at both ends is partially submerged in water as shown below.

A tuning fork vibrating at frequency 850 Hz is placed over the top of the pipe. The pipe is slowly raised until the first loud sound is heard when the length of pipe above water is L.

The experiment is repeated with another tuning fork of unknown frequency f and first loud sound is heard when the length of pipe above the water is 2L. 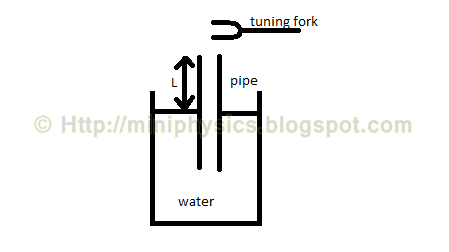