(ii) A student suggests that when heat is supplied to a system, the temperature will always increase. Give an example to show when the statement is not true.

b) When a system is taken from state a to state b in the diagram below along the path acb, 90.0 J of heat flows into the system and 60.0 J of work is done by the system. 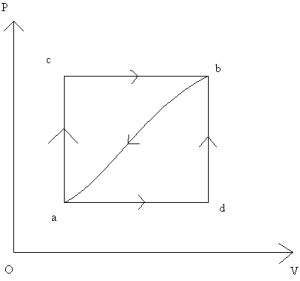 i) Show that the increase in internal energy for path acb is 30 J.

ii) Explain why the increase in internal energy for path acb is the same as adb.

iii) Hence calculate the amount of heat that flows into the system for path adb if 15.0 J of work is done by the system.

iv) If the increase in internal energy from a to d is 8.0 J, find the amount of heat absorbed in the process db.

State whether the system gained or lost heat and calculate this amount of heat exchanged with the system?

c) i) State one assumption that can be made when a gas is assumed to be ideal.

iii) Show that the internal energy of one molecule of air at a temperature of 25°C is 6.17 x 10-21 J. Assume that the air behaves as a mono-atomic ideal gas.

The specific latent heat of vaporisation of water at 20°C is appreciably greater than the value at 100°C. This is because

An ideal gas, contained in a cylinder by a frictionless piston, is allowed to expand from volume V1, at pressure p1, to volume V2, at pressure p2. Its temperature is kept constant throughout. The work done by the gas is

a) State two quantities which increase when the temperature of a given mass of gas is increased at constant volume.

Assuming that the air behaves as an ideal gas, calculate

i) n, the amount, in mol, of air
ii) the mass of air
iii) the density of the air

Back To Thermal Physics