Refraction of light is the change in direction (bending of light rays) when it passes from one optically transparent medium to another. 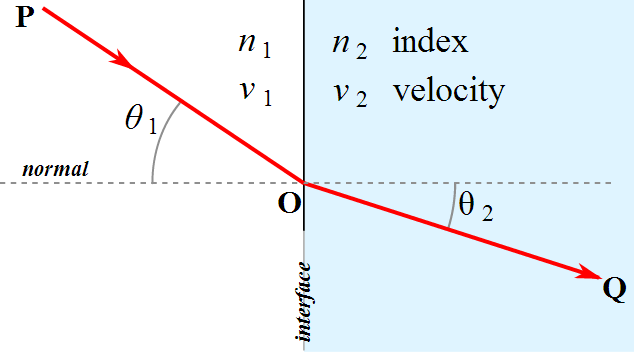 Refracted ray is the bent ray as a result of passing from one optical medium to another.

Normal is an imaginary line perpendicular to the interface of media where the refraction occur.

Angle of incidence is the angle between incident ray and the normal.

Angle of refraction is the angle between refracted ray and the normal.

First law of refraction states that the incident ray, the refracted ray and the normal to the interface all lie in the same plane.

In summary, light travelling from:

However, if the light ray enters another medium perpendicularly to the boundary, there is no deviation of the ray even when there is change in speed of light. 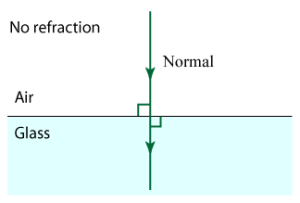 Another definition for refractive index: 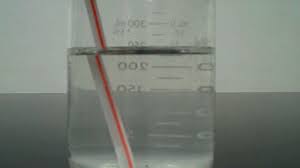 A pool of water looks shallower than it really is. A straight object placed in water looks bent at the surfaces.

For visible light, the refractive indexes of most transparent medium decrease with increasing wavelength. Hence,

This causes white light to split in its constituent colours (rainbow) when it passes through a prism.

Additional notes about speed of light in medium (v): (OPTIONAL)

Note: The absorption and re-emission of light actually contributes to the development of lasers. You will be able to learn more about this if you choose to study Physics in A level.

8 thoughts on “Refraction Of Light”