– Between 1708 – 1724, he discovered ways to make high quality liquid-in-glass thermometers and proposed the following fixed points to standardise measurements.

– After careful experiments, Celsius chose the two fixed points to be the melting point of ice and the boiling point of water.

He assigned values to the two fixed points:

In 1742, he published a paper “Observations of two persistent degrees on a thermometer” in the Annals of the Royal Swedish Academy Of Science.

Then the fixed points were switched around:

In 1948, the world body renamed it the Celsius Scale.

Converting between the Fahrenheit and the Celsius Scales

Both Fahrenheit and Celsius scales are linear scales. The equation used to convert between the two is:

,where F is Fahrenheit reading, C is Celsius reading, a and b are constants to be determined.

– This scale is based on the absolute zero of temperature, 0 K (the state of minimum thermal energy) and uses degrees equal in size to the Celsius degree, so it needs only one other fixed point. The standard fixed point adopted is the triple point of water: 273.16K at 4.58 mm of mercury pressure.

The triple point of water is a state at which liquid water, water vapour and ice coexist in equilibrium. It occurs at 273.16K and 4.58 mm mercury pressure. 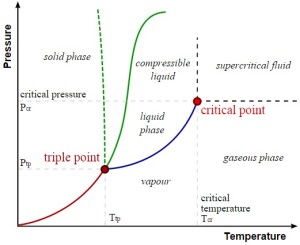 – This scale is also based on the theoretically absolute zero of temperature but uses degrees equal in size to the Fahrenheit degree. Hence, the freezing point of water is 491.6°R.
Fixed points and other reference points:

In the far future, a group of astronauts visited a planet inhabited by aliens. The aliens have a temperature scaled based on the freezing and boiling points of water, and are separated by 100 of the aliens’ degrees. (What a coincidence) Would the size of the aliens’ degrees be similar to ours? Suppose the aliens have also came up with a scale similar to the Kelvin Scale. Would the absolute zero on their scale be the same as ours?