The second law of thermodynamics is based on experimental observations.

It places constraints on 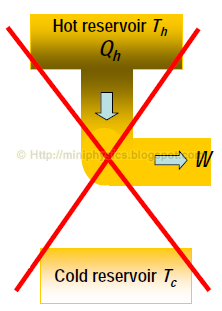 It is impossible to construct a heat engine operating in a cycle, that simply absorbs heat from a reservoir and produces an equal amount of work.

– In other words, it is not possible to have an engine with efficiency e = 100%. The engine cannot operate with Qc = 0

This form of the second law says that heat cannot be entirely converted into mechanical work in a cycle. You cannot make a perfect 100% efficient heat engine! 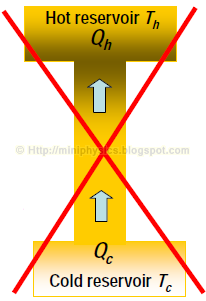 It is impossible to construct a heat pump that provides a continuous transfer of heat from the cold reservoir to the hot reservoir without the input of work.

– In other words, it is not possible to have a heat pump with infinite Kc or Kh.

This form of the second law says that heat does not flow spontaneously from a cold body to a hot body. You cannot make a perfect heat pump/ refrigerator that does not require input of work.

Equivalence of the Kelvin-Planck and Clausius Statements Thought experiment: If we could build a ‘work-less’ heat pump that violates Clausius form of the second law, we could in principle join it with a “normal” heat engine to recycle the rejected heat, and therefore make a combination that ultimately converts all heat into work.

The operation of this combination engine will therefore violate the Kelvin-Planck form of the second law. Conversely, if we could build a 100% efficient heat engine that violates the Kelvin-Planck form of the second law, and converts all heat input from the hot reservoir into work, then we could in principle join it with a “normal” heat pump to keep pumping heat continuously from the cold to the hot reservoir without requiring continuous work input.

This violates the Clausius form of the second law.

Next: The Carnot Engine