The I-V graph of metallic conductor is a straight line pass through the origin. They obey Ohm’s Law, having resistance that is independent of current. (Ohmic conductors) 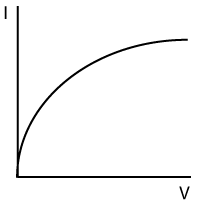 Back To Current Electricity (O Level)