In classical mechanics, we are concerned with the concepts of work and energy.

Work-energy concepts are based on Newton’s laws and do not involve any new physical principles.

The work-energy concept can therefore be applied to the dynamics of a mechanical system without resorting to Newton’s laws. This is useful in complex situation (e.g. variable forces) and applicable to a wide range of phenomena.

Energy is present in the Universe in various forms.

Energy can be transformed from one form to another.

Conservation of energy states that when energy is changed from one form to another, the total amount in the system remains the same.

Work Done By A Constant Force

When force is parallel to displacement, Work done by a force = force $\times$ displacement

When the force is an an angle $\phi$ to the displacement,

A force does no work if the object does not move.

Work done by a force is zero if the force is perpendicular to the displacement.

Work Done By A Varying Force 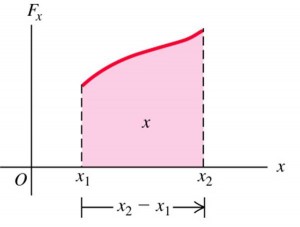 Work along a curved path

In general, for a varying force along a curved path, small element of work done $dW$ during displacement $d\vec{l}$ is:

Note that the component of force perpendicular to path, $F_{\perp} = F \sin{\theta}$, does no work.