In the presence of a magnetic field $\vec{B}$ (a vector field), a moving charge q experiences a magnetic force $\vec{F}$.

When a charged particle moves through a region of space where both electric and magnetic fields are present, both fields exert forces on the particle. The total force is given by: (also called Lorentz force)

Motion of a charged particle under the action of a magnetic field alone is always motion with constant speed.

Note that the above scenario is for velocity being perpendicular to the magnetic field.

Applications Of Motion Of Charged Particles 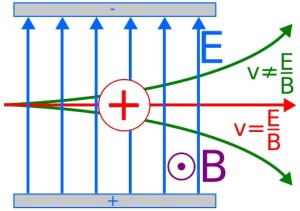 It is used in velocity selector, where only particles with velocity $v = \frac{E}{B}$ will be able to pass through without being deflected by the fields. Refer to the diagram above. The positive charge will experience a force upwards due to the electric field and a force downwards from the magnetic field. When the charge is not deflected, this means that both forces are equal.

How do you obtain that mysterious ratio? We start from the Lorentz force:

For the particle to pass through without being deflected, the Lorentz force acting on the particle should be 0. Hence, In mass spectrometer, the material to be investigated is ionized and fed into a velocity selector. The velocity selector will ensure that the ions exiting will have the same velocity. These same-velocity ions are then fed into a region with the magnetic field lines perpendicular to the velocity of the ions. From the EM theory, the ions will experience a magnetic force and hence, undergo circular motion. The radius of the circular motion made by the ions will depend on the mass and charge. We can see this by:

J.J Thomson was the first scientist who measured charge to mass ratio (e/m) of an electron. The apparatus, as shown above, consists of a highly evacuated glass tube which is fitted with electrodes. Electrons are produced by thermionic emission from the electrical heating of a tungsten filament. The electrons are made to accelerate (due to a potential difference) and form a beam. The resulting beam is passed through a region with electric and magnetic field of known magnitudes. At the end, they hit on a zinc sulphide screen.

The kinetic energy gained by the electron due to the potential difference is given by:

By knowing the E, V and B, you can calculate the electron’s charge to mass ratio.

Back To UY1: Electromagnetism