An ordinary light source consists of a large number of randomly oriented atomic emitters. Each excited atom radiates a polarized wavetrain for roughly $10^{-8}$ s. New wave trains are constantly emitted and the overall polarization changes rapidly in a completely unpredictable fashion. Therefore natural light should not be called unpolarized light. It should be randomly polarized light.

is an optical device whose input is natural light and the output is of some form of polarized light. 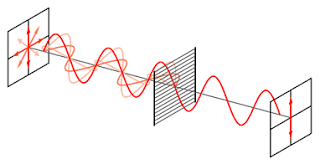 When a plane polarized light passes through another plane polarizer at another angle, the intensity of the light that exits is given by:

$I_{\theta} = I_{o} \text{sin}^{2} \, \theta$, where
θ is the angle between the transmission axis of the 1st polariser and that of the anaylzer.
Io being the intensity of light passing through the 1st polarizer. 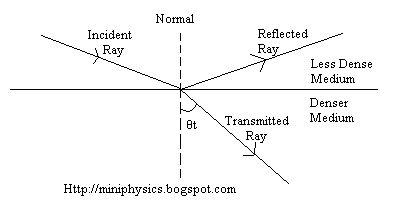 At a particular angle of incidence, such that the angle of reflection and the angle of transmission adds up to 90°, the reflected ray will be polarised in the direction parallel to the surface, perpendicular to the incident ray. 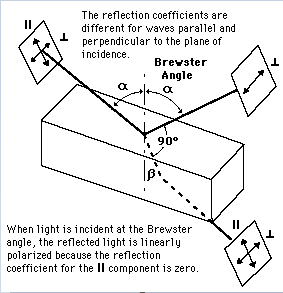 Explanation for polarisation by reflection:

This phenomenon can be understood qualitatively by taking into account the absorption and re-emission of light as it cross the boundary. Incident light can be resolved into parallel and perpendicular components. When incident light crosses the interface, the light is absorbed temporarily by atoms in the second medium. Electrons in these atoms oscillate back and forth in the direction of the electric field vectors in the refracted ray, perpendicular to the direction the reflected light is going.

After a brief period of time, the light is re-emitted by the atoms to form both the reflected and refracted rays. The electric field vectors in the light match the direction the electrons were oscillating and they must be perpendicular to the direction of propagation of the wave. Birefringence is the division of a ray of light into two rays when they enter an optically anisotropic material.