Melting is the change of state from a solid to a liquid. Melting of a pure substance occurs at a particular constant temperature called melting point.

The change of state from a liquid to a solid is called solidification or freezing or casting. A pure substance freezes at a temperature equal to its melting point. 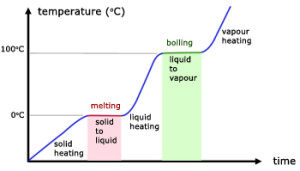 From the graph above,

Step by step process of what happens during melting:

Cause for constant temperature during melting: The absorbed heat energy during melting is used to weaken the attractive forces between particles and not the kinetic energy of the particles.

Melting point is affected by purity of sample and pressure on the sample.

Mostly substance increases their melting point when a pressure is applied in their solid state.

Note: Freezing point of pure water is 0 °C at standard atmospheric pressure. (Melting point of a substance must be stated together with its purity and surrounding pressure.)

Back To Thermal Physics (O Level)

3 thoughts on “Melting and solidification”